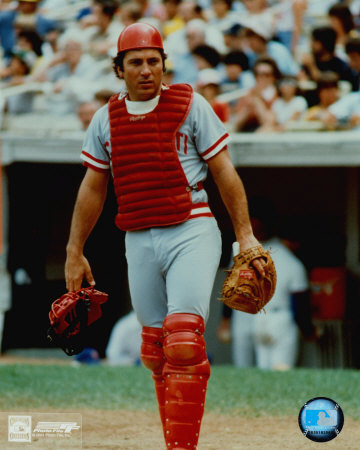 Bench is on the short list of the greatest catcher of all time, so there seems little point in what-if scenarios. And the grueling nature of catching makes long-term projections seem suspect. Nonetheless, Johnny Bench—through his age 24 season in 1972—had not only two seasons in which he had 40 or more home runs, but he had also just doubled his walk rate, drawing 100 free passes in 1972. Under typical scenarios and aging patterns, this should have meant some amazing things—if I scale down Bench’s projections from a 1972 vantage point to match his actual playing time over the years due to injuries, etc., he still projected to hit 500 home runs, instead of his actual 389.

As the story goes, a spot was found on an x-ray of Bench’s lungs during the ’72 season, and while the tumor turned out to be benign, he still needed surgery, which—again, as the claim goes—severely impacted Bench’s power at the plate. Maybe it’s true, maybe it’s wishful conjecture from a wistful athlete who happened to peak early, but the fact remains that the early part of Bench’s career was basically meant to blow your mind. Despite being hampered by injury in 1971, Bench had 154 home runs and 512 RBI before turning 25—both representing better starts than Hank Aaron, Willie Mays, or Reggie Jackson, all of whom also got early career starts. For all the impressive hitting stats, by all accounts Bench revolutionized the catcher position defensively. Most fielding statistics cannot possibly do his reputation justice; perhaps only the caught stealing percentages get us close (routinely around 50%, was 13 years into his career before the CS% dropped below 40%), as well as the ten consecutive Gold Glove awards.

The data paints a picture of Bench as a multi-dimensional athlete, especially compared to the prototypical catcher: Bench hit at least one triple in every season until 1979, he was good for a handful of steals every year—peaking at 13 in 1976, and he routinely spelled his legs by playing other positions 20-30 times a year (even playing center field a couple times in 1970). A Cincinnati Red for his entire 17-year career, Bench was productive almost until the end. 1980 was his last season as a regular catcher, crouching behind the plate in 105 games, and hitting for a 123 OPS+. A severely shortened season in 1981 (even beyond the effects of the player strike) left him as a part-time first baseman with a great bat (141 OPS+). The final two years were mostly spent at 3rd base (to poor result, defensively) and hitting right around league average. His legacy is as another lifetime Red, with a cumulative OPS+ of 126 across 8600 plate appearances, with a pair of peak seasons to rival Morgan’s finest.

The Top 15 Catchers in Reds history