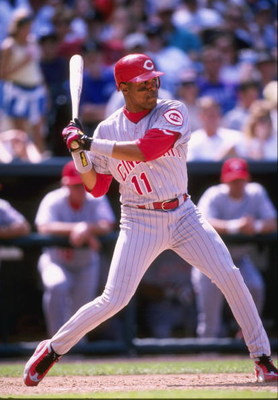 In 19 seasons, all with the Reds, the injury-prone Larkin had just four years where he played in 150 games or more. Similarly, over the 13 consecutive year stretch in which Larkin posted a 100 OPS+ or higher every single season, he averaged just 126 games played. While this depressed Larkin’s counting numbers and peak impact, he was an impressive player nonetheless, with seemingly no weakness: he had speed (5 different times with at least 30 steals), he had power (consistently reaching 30 doubles, once hit as many as 33 home runs), and he provided solid defense (note the Gold Glove awards, although the specific years he won were probably make-up awards for the years where the Ozzie Smith inertia screwed Larkin out of winning).

From a less quantitative standpoint, Larkin was also one of the smartest players I’ve ever seen; this too is evidenced to some degree by the numbers (83% steal percentage, 15% more walks than strikeouts). In 1995, Larkin won the NL MVP due to his award-winning defense, his 51 stolen bases (against just 5 times caught), and his 133 OPS+ bat from the shortstop position. While there were possibly more worthy recipients that year, Larkin quieted doubters by following up with a monster 1996, in which he hit the aforementioned 33 dingers, scored 117 runs, and posted a 154 OPS+. Naturally, he finished 12th in MVP voting that year. In a note that reflects both on Larkin and on the teams for which he played, no Reds player has been the singular best player on the team in as many seasons as Larkin (8 different seasons, by my count), and no Reds player’s stretch of inter-team dominance spanned as long (11 years from 1988 to 1998). In that time, Larkin managed a 130 OPS+ or higher seven different times, which was obviously an incredible asset from such an important defensive position. Larkin made the most of his limited postseason opportunities, hitting 338/397/465 in 78 plate appearances. For his regular-season career, Larkin finished with over 9000 plate appearances and a 116 OPS+.

The Top 15 Shortstops in Reds history