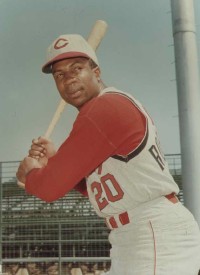 Signed as a 17 year old out of high school, Robinson was an instant star, destroying three levels of minor league ball in his first three professional seasons, before being given the full-time left field job in 1956, at age 20. Robinson—tying a rookie record in the process—hit 38 home runs, good for 2nd in the NL, and his 6th place OPS+ finish (142) gave evidence to Robinson being more than your basic slugger. In fact, Robinson’s career was partly defined by his unusual ability to be hit by a pitch, due to his habit of crowding the plate. For his inaugural efforts, Robinson was unanimously selected as Rookie of the Year, and he even received significant support for the overall MVP, finishing 7th. Robinson hit 60 more dingers over the next two years, won a Gold Glove award in left field, and kept receiving consistent down-ballot MVP support, despite his decreased production compared to his rookie year.

Defensively, Robinson was flexible, but perhaps would have been better served not to be. He was a good fielder in LF (with the stats perhaps swayed by Crosley Field’s smallish left-field area), but he was—at various points in his career—also inserted in center field, right field, first base, and third base. At none of those positions was he anything better than mediocre, leading to an assumption that neither his range nor his arm nor his glove were especially gifted. However, despite his Gold Glove award in 1958, Robinson was moved to first base the next year and curiously enough, his hitting exploded to a new level with new career highs in RBI, steals, walks, and OPS/OPS+. The next three years, mainly split between first base and right field, defined an obvious peak for Robinson, concurrent with an impressive decrease in strikeouts (never whiffing more than 67 times over this 3-year stretch). From 1960-62, Robinson had three straight years of leading the NL in OPS and OPS+ (among contemporaries such as Mays, Aaron, and Clemente), with a cumulative stat line of 323/411/611 (168 OPS+). 1962 was particularly peakish: 51 doubles, 39 homers, 134 runs scored, 136 RBI, 342/421/624 (173 OPS+). While not quite to that level, the following three years were mighty fine as well.

Robinson was now 30 years old, with ten full seasons with the Reds. His stats almost exactly worked out to 150 games per year, and here was his average season in Cincy: 303/389/554 (150 OPS+), 104 runs, 101 RBI, 32 doubles, 32 home runs, 16 steals, 70 walks, 79 strikeouts. There’s a caveat that Robinson was custom-built to play in Crosley Field (his career OPS in Crosley was 1002, as compared to his overall Reds OPS of 943), but still—those numbers ain’t bad. Which brings us to the obvious Robinson narrative: the trade. In December, 1965, Robinson was traded to the Baltimore Orioles for Jack Baldschun, Milt Pappas, and Dick Simpson. Robinson promptly had the best season of his career with 49 home runs and a 198 OPS+ while the Reds fell from an 89-win team to a 76-win squad. Befitting the curious circle of life, Tony Perez benefitted the most from Robinson’s departure, but he had a poor 1966 season, and the Reds had no one to replace Robby’s bat. Was the trade defensible? No one could have predicted Robinson’s post-age-30 resurgence…he had up to that point followed a typical aging pattern. The problem was certainly with the return: Pappas was younger, but had already racked up 1600 innings, and while Simpson was a nominally promising outfielder, the prior season he struck out 148 times in AAA-ball, rarely an indicator of future success. As fate would have it, Robinson re-surfaced in 1970 to help beat the Reds in the World Series. He hit for a 151 OPS+ that year at age 34, which would have certainly earned him a spot in the lineup, presumably replacing Lee May at first base. Given May’s status as the linchpin to the Joe Morgan trade, that’s a very interesting alternate reality scenario…