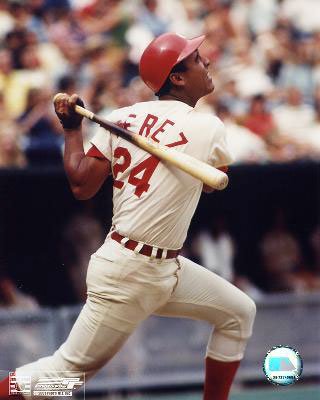 If you’ve had any kind of indoctrination in Reds history, you are well aware of Tony Perez and his proclivity for clutch hitting. If you’ve had any kind of indoctrination in sabermetrics, you are already thinking up ways to discredit that last sentence. So then, how to consider Tony Perez? His career spanned 23 seasons (16 with the Reds), and his lifetime career OPS was 804. Looking at his career splits yields some interesting results, as compared to the 804 benchmark: An OPS of 833 with runners in scoring position (while only 764 with nobody on); when the game was in the 7th inning or later, and the score was close, Perez hit for an 859 mark; in "high leverage" situations (as defined by Tom Tango), the OPS was 859—in low leverage game states it was just 776; and in extra innings, Perez was off the charts with a career 984 OPS. Case closed, right? Digging deeper, if we look at Perez’s best season of 1970, in which he had a 990 OPS, we see almost no difference in his stats if the bases were empty or if there were runners in scoring position…and his high leverage numbers were worse (939 OPS) than his overall totals. In his next best season (1973), Perez actually hit the best in "medium leverage" situations. In 1975, while finishing 3rd in the NL in RBI, Perez’s overall OPS was 34 points higher than when filtering out all but his high leverage at-bats.

Is the clutch status a myth? Not necessarily, but I think there were probably three other issues contributing to this storyline: 1) Perez hit 4th or 5th for some really good offensive teams who put a premium on getting on base. Perez finished in the NL top 10 in RBI ten straight times (1967-76) without putting up consistently gaudy numbers, although he certainly had his moments, so presumably the perception was that there was some intangible skill beyond sheer volume of run-driving opportunity. 2) As documented in Joe Posnanski’s book on the ’75 team, Perez wasn’t very adept at producing quotable copy for the beat writers, so the clutch meme was probably an easy story to create. 3) In Perez’s first three full-time seasons (1967-69), the numbers were so overwhelmingly skewed towards the high leverage performances that it would have been nearly impossible to miss (3-year composite OPS: 823, "late and close" OPS over that period: 1027).

Depending on your point of view, this may constitute evidence for Perez’s clutchness, but it almost certainly set the tone for the rest of his career. As for that career, Perez played in over 1900 games for the Reds and hit well (127 OPS+). His peak came while hitting near a 160 OPS+; potentially MVP-worthy were it not for a certain catcher teammate. Perez was famously traded after the 1976 season to make room for Danny Driessen. Conceptually, the move made sense: Perez was 34 years old, he had clearly settled into a plateau a few degrees removed from his peak, and the Reds were dealing from a place of surplus. In reality, the move didn’t work. Although Driessen was an adequate replacement, the offensive depth was reduced to nothing, and more importantly—the players received from Montreal in return for Perez (Woodie Fryman and Dale Murray) pitched horribly for the Reds. Or maybe there was some clutch element missing…