As demonstrated in the opening article, the 2009 Reds fielding was a massive improvement over the 2008 team fielding.  Like we did with the offense, lets go position by position: 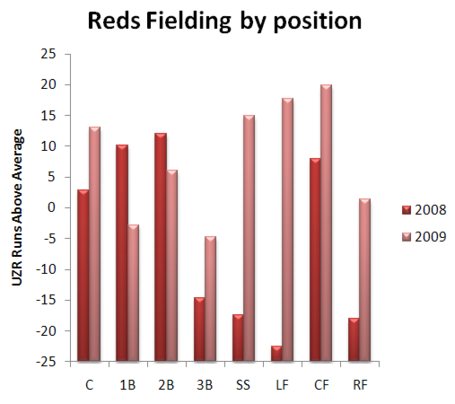 The above plot is strictly based on UZR data (except for catchers, which use "my" catching stats based on sb/cs/pb/wp/e rates).  But you can see that there was a small dropoff in both Votto's and Phillips' fielding scores, but nice upticks at catcher, 3B, and CF....and GARGANTUAN improvements at shortstop, left field, and right field.  In each case, a massively sub-par fielder (Keppinger, Dunn, and Griffey) at each position was replaced with one or more well above-average fielders. 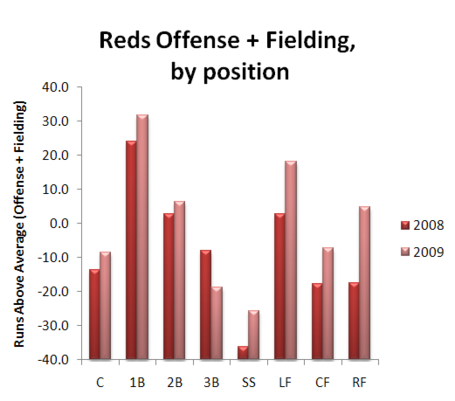 Granted, this is strictly using UZR data.  But wow--we're seeing net improvements at virtually every position.  The only dropoff was 3B.  We're even seeing improvements in LF, where the Reds essentially traded an offensive juggernaut in Dunn for players who could actually catch the ball.  I think if Dunn had played the entire 2008 season with the Reds, those bars would be close to equal.  That's pretty amazing.  Despite the dropoff in offense, at least by these measures, the move to a fielding-oriented team over the past year really did work: the 2009 squad of position players was better than the 2008 squad, almost across the board.  This is not what I expected to see when I started this.

The following table summarizes fielding data for each player, and combines the fielding data with offensive data to get a total win value statistic.  Here, whenever possible, I'm including both UZR and Fans Scouting Report data (pro-rated to playing time, converted to runs). Specifically, UZR data is being "regressed" onto Fans data.  The overall fielding estimate for regulars is close to the average of UZR and FSR.  But for more part time players, where UZR becomes less reliable, I'm weighting the FSR data more heavily than UZR (up to 10% UZR, 90% FSR).  For players who do not have FSR data, I'm assuming a fans value of league average.  The overall approach is admittedly a bit quick and dirty, but it mitigates a lot of the problems with using single-season UZR data by combining those data with less volatile scouting data.  I'm pleased with the results.

Pitchers, shown in italics, receive a massive position adjustment in recognition that a replacement pitcher is an average hitting pitcher.  Note that these values still don't get you to pitcher WAR, but they will shortly.  The table is sortable if you click in the header.

Notes on table: hitRAR is the wRAR number from the offense post.  UZR is FanGraphs' fielding statistic, shown in units of runs.  FSR is from the fans scouting report, converted into runs.  Field is a composite of the UZR and FSR columns, with roughly equal weighting for a player like Phillips or Votto who played most of the season, and more weighting to FSR as playing time gets lower and lower.  PosAdj is a position adjustment, in recognition that there are differences in fielding quality among different positions (i.e. it is easier to be an average fielding left fielder than an average-fielding center fielder).  WAR is wins above replacement, and is based on the sum of RAR, Field, & PosAdj, converted from runs to wins.

I don't think there was much doubt of this, but Joey Votto was clearly the most valuable position player but a full win.  After him, however, was Brandon Phillips, who by my numbers was pushing close to being a 4 win player.  OBP be damned, that's a quality asset, folks--worth almost $17 million on the free agent market!

Below Phillips, we have a pretty big dropoff to the 0.5-1.5 WAR players: most of the outfielders (including Stubbs for his fabulous September), the quality part-time performance of Ryan Hanigan, and twoish months of Scott Rolen.  As a group, this set of players put up very good rate stats (average WAR/700 PA for this group is ~3.5), but none accumulated more than 400 PA's.  A lot of the reason for that is injury, but it was also about leveraging strengths.  The left field "platoon" worked pretty well, perhaps because it prevented overexposure of guys like Dickerson to same-handed pitchers.

The player with the third-most PA's on the team, this year, however, was Willy Taveras.  And if you are going to complement Dusty on his use of players like Nix, Dickerson, and Gomes in LF, you have to come down equally hard on his use of Willy Taveras.  Taveras just had a miserable season.  He still has decent wheels, but he went through mind-blowingly long stretches without getting on base.  He didn't walk much, didn't hit much...he even struggled with his fielding as indicated by his harsh FSR rating. I have him at a full 1.5 wins below replacement, tied for worst with the anemic Alex Gonzalez (who, to be fair, got there in 160 fewer PA's than Taveras).  I call Taveras "Corey Patterson, without the power."

Other bad (replacement-level or worse) performances came from Ramon Hernandez (I expected him to be an upgrade over Bako--he wasn't), Jerry Hairston (the magic was gone this year, but at least the guy got a ring), Edwin Encarnacion (did we all get it wrong on this kid, or is there more to come?), and Adam Rosales (he hustles well enough, but you still have to hit to stay in the big leagues).

A few other players of note: Ryan Hanigan had a heck of a year.  He hit like an average replacement player, but that's an asset when you can catch--especially when you're an elite defender like he apparently is.  Both his objective catching statistics and his Fan Scouting agree that he was awesome behind the dish this year.  All of those combined for more than 1 WAR from a guy who played less than 50% of the time.  ....  Paul Janish held his own at shortstop after Gonzalez departed, despite not playing much during the first half of the season.  He's not a great long-term solution, but you can probably do worse than letting him play every day.  .....  Jonny Gomes, as we discussed before, was the worst fielder on the team, and this pretty severely cuts into his value. .....  Micah Owings, based on comparisons to other pitchers, added an extra 0.8 WAR to his overall value with his hitting skills.  We'll tack that onto his value in the next piece.  By the same token, unusually bad hitting performances, even compared to other pitchers, pitchers, will take a half-win or so off of Arroyo's and Bailey's overall value.  Hitting does matter for pitchers!

Overall, despite the fact that only two players broke 500 PA's, what's amazing about the 2009 team is that the overall contribution of all of these mixed and matched players resulted in an improvement over the 2008 squad, despite a dramatic switch from an offensive-oriented club to a fielding-oriented club.  Were they great?  No.  But they were improved.  If nothing else, it's something to build on for next season.

I'll leave you with this graph, showing batting, fielding, and overall WAR (all courtesy of FanGraphs, not my stuff) for the past several years:

...maybe improvement over the 2008 team isn't worth bragging about.