Share All sharing options for: Sabermetric Review of the 2009 Reds, Part 2: Offense

A late season surge helped prevent a historically bad offense, but nonetheless, relative to average, the Reds fell off 26 runs in 2009 to 71 runs below average (after park adjustments).  It was the worst Reds offense since the 1997 team (95 runs below average).  On a team level, where did this offensive dropoff come from?  Let's go position-by-position: 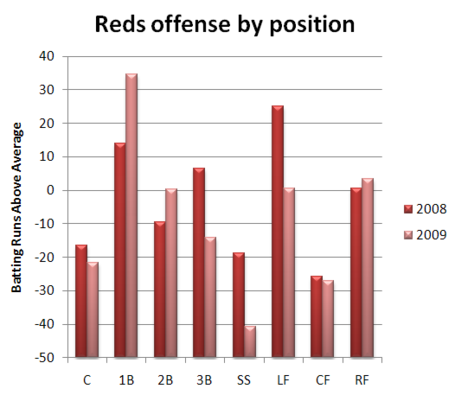 Notes: Batting runs are the "Batting" stat from fangraphs, which are park-adjusted for us, and include all players at each position on the '08 and '09 Reds teams.  Players playing multiple positions had their offenses pro-rated based on innings played at each position.

The Reds had a nice uptick at 1B and 2B thanks to improved offensive seasons by both Votto and Phillips.  But there were major dropoffs in offense at 3B, SS, and LF.  3B was largely due to the massive underperformance of (and injury to) Encarnacion and subsequent powerless debut by Scott Rolen.  At SS and LF, the story is a bit more nuanced.  The Reds had guys who were essentially playing out of position at those positions in 2008 (Dunn, Hairston, Keppinger), but in 2009 were replaced by guys who didn't hit as well but contributed significantly better fielding (Janish, Dickerson, etc).  Also, given how much time Paul Bako got in 2008, I was surprised to not see better offense from our catchers.  But then I looked again at the 2009 catchers' hitting stats and it all made sense again.  More on the individual players below.

For the individual player stats, there are a few flourishes that distinguishes what follows from what you'll find at Fangraphs, for example (which is my primary data source).  First, everything's park adjusted.  This is a big deal for Cincinnati, which is a moderate hitter's park (5 year regressed park factor has climbed to 1.04!).  Second, the last three columns include not only the hitting information, but also full baserunning info from BPro.  This includes not only stolen bases, but also things like advancing 1st to 3rd on a single.

Here are all individual Reds player performances for 2009.  The table is sortable if you click in the header.  I've italicized pitchers to make it easier to ignore them if you wish to do so.

Table notes: Most stats were pulled or calculated from those at FanGraphs.  Most should be self-explanatory.  EqBRR is Dan Fox's baserunning stat from Baseball Prospectus.  wOBA* is an all-encompassing offensive stat read on the same scale as OBP.  It is based on wOBA listed at fangraphs, but then park adjusted and further adjusted to include EqBRR baserunning information.  wRAA* is runs above average, based on wOBA*, and so is park adjusted and includes EqBRR.  wRAR* is based on wRAA*, plus a 2.0 wins/700 PA modifier (the difference between an average hitter and a replacement hitter).  wRAR* does not consider position--that includes pitchers!  We will apply position adjustments when calculating win values in a subsequent post.

Joey Votto is the clear winner of the best offensive player award, despite missed time due to illness.  The guy just had an incredible season.  His 0.372 BABIP is a source of concern, however--that's almost certainly the result of some good luck, which will (at least) pull down his on-base stats.  But he doesn't have to have an 0.372 to be a fine hitter.  I'll happily take his CHONE projection in 2010 and every year thereafter...though, maybe with a few more PA's.

The often maligned (at least in the blogosphere) Brandon Phillips comes in as the second most valuable hitter, at least relative to replacement level.  Yes, he's a free swinger, and yes, he's misplaced hitting 4th on a team.  But he's proven to be an extremely durable, consistent hitter with good power and the ability to add to value with his baserunning game.  He, along with Taveras, contributed the most on the basepaths this year (+3 runs overall).

Jonny Gomes comes in third, and I'm sure this is why so many are enthusiastic about re-signing him (despite his fielding problems).  His 0.274 ISO was the highest of any hitter on the team, and second only to the incomparable Micah Owings.

But from here, we just drop off a cliff.  I find it flat-out shocking that only three hitters crossed the 10 RAR plateau on this Reds team.  In 2008, we had seven players top that plateau, with Jay Bruce essentially #8.  There just wasn't much good hitting talent--or at least good hitting performance--on the team this year.  In contrast, we had five hitters at least 5 runs below replacement level (Rosales, Tatum, Janish, Taveras, and Gonzalez; this is offense only).  Now, some of that was made up for with glovework.  But even so, this is a miserable offense.  All I can say is thank goodness for Joey Votto.  Can you imagine what this team would have been like without him?

A few other hitters of interest.  I've read a lot of optimisim about Jay Bruce, with many pointing to his 0.221 BABIP as something that won't happen next season.  I hope they're right, and I was glad to see the power there from him, but I worry about his line drive %.  Those things can fluctuate, and Bruce is young and tremendously talented.  But a bust-out season next year isn't guaranteed from where I sit......Micah Owings lived up to his reputation and had a terrific year at the plate for a pitcher, often serving as our top right-handed pinch hitter.  And keep in mind the pinch hitting is measurably more difficult that hitting when you're already in the game, so Owings is probably better than he showed.  He didn't walk much, and I wonder if that eventually will catch up to him as pitchers learn to exploit his weaknesses.....Drew Stubbs showed surprising power in his September call-up, but his on-base skills weren't as evident, walking only 8% of the time.  There was some talk that he'd modified his swing upon arriving in the big leagues, but I haven't seen confirmation of that and I'm skeptical.  Honestly, I think he just got lucky.  I have very little idea of what he'll hit next season.....Juan "El Nino Destructor" Francisco hit the crap out of the ball in his 25 PA's, even walking at a nice clip.  But 0.615 BABIPs tend to decline, and I have almost zero confidence that he's actually big league ready.....Lowest walk rate by anyone on the team with more than 100 PA's?  Our leadoff hitter, Willy Taveras.  I kind of miss Norris Hopper.....How bad was Ramon Hernandez?  And manning 1B when Votto was out, no less!  I argued last spring that a combination of Hernandez and Hanigan would be a massive upgrade on last year's catching.  As the graph at the top of the page shows, however, it wasn't.  Not that Tatum or Miller helped much on that front.

Next time (probably after the holidays): Fielding, and combining fielding value with offensive value to get position player win values!