Share All sharing options for: Sabermetric Review of the 2009 Reds, Part 1: Overview

Let's start by comparing this year's team to the other Reds teams of the '00's: 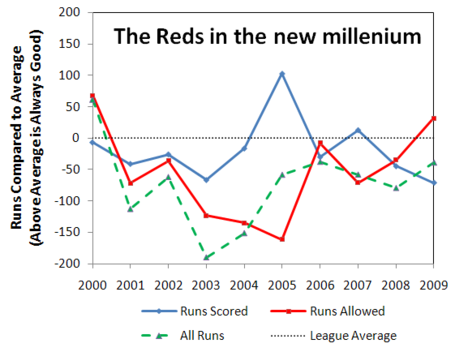 We all know this, but the last good Reds team was Griffey's first year and Jack McKeon's last.  After that, Bowden's ragtag assemblages stopped working, and the Reds bottomed out in 2003-2004.  A combination of Dan O'Brien, Wayne Krivsky, and Walt Jocketty oversaw the 2004-2009 teams, which have tended to come in somewhere around 55 runs below average (expected 74 wins or so).

What's fascinating to me about these teams over the last five years is that they've gone about posting their marginally below-average records in such different ways.  The 2005 team was, by a massive margin, the most unbalanced team in Reds history in terms of runs scored and runs allowed (next closest were the 1944 & 1976 Reds teams, but the disparity of the 2005 team was 30% larger).  The defense (pitching + fielding) made a huge comeback in 2006 with Arroyo's fluky season and one of Harang's best, but the spectacular 2005 offense largely evaporated, especially over the last two months of the year.

2007 saw the offense rebound but the defense slide. But over 2008 and now 2009, we've seen a steady shift in a team that is becoming more focused on pitching and fielding, and less on offense.  2009's team ultimately had the best run prevention of any team since 2000.  What's that?  You don't think of the 2000 club as a team with great pitching & fielding?  I didn't either.  But NL teams scored 5.0 runs per game that year compared to 4.4 runs per game this year.  So, you can more or less subtract a half-run from each pitcher's ERA in 2000 to compare them to this year's run environment.  It was a different world!

2009 Season breakdown begins after the jump.

(Notes on table: everything's park adjusted to the degree that this is possible.  wOBA is a comprehensive offensive rate stat on OBP's scale, and reports properly weighted impact of all hitting events as well as complete baserunning from BPro; FIP and tERA are both fielding-independent measures of pitching quality, on the same scale as ERA; Fielding is based on UZR and THT's team fielding stat, as well as "my" catching statistic; eRS and eRA are estimated runs scored and allowed based on offensive and defensive statistics, and Component Record is simply a pythagorean record based on eRS and eRA).

Non-statspeaky summary of table: offense was lousy, pitching wasn't great either, but the fielding was freaking awesome.  Overall, a below-average team.  And they might have been a bit lucky, too.

How the season unfolded.

Here's the Reds' sparkline, courtesy of the Hardball Times.  If you haven't seen these before, "upticks" mean a win, "downticks" mean a loss, red games are close, and black games in this case are (as I set it up) won by more than three runs.  I've added a few notes reflecting my personal feelings about the team over the course of the season.

I swear, the Reds do this to me every year.  They start out kind of decent, then collapse, only to pick up again at the end of the season when it's hard to find the motivation to watch them.  Even so, it was hard not to be at least pleased by their performance over last week and a half of games.  I guess that's what playing Houston & Pittsburgh will do for you, though.

Here's another look at the same thing, again from Hardball Times.

Cardinals sure exploded in August, eh?  And, living in PA, I have to also sympathize with poor Pittsburgh...

As much as I enjoyed the Reds' ascent back into mediocrity in September, I can't help but think that they might have done little more than negatively affect their position in next June's amateur draft...