This past Saturday, BK, jch24, 'tHan and I were given the opportunity to take a tour of the fabulous Green Diamond Gallery in Montgomery. For those that aren't familiar with the Green Diamond Gallery, it is a fantastic private collection of baseball memorabilia that has been put on display in a pristine gallery here in town. It is an amazing collection that is made even more amazing by the fact that it has all been acquired by a single person. There are artifacts on display from all the way back to the start of the National League in 1876 and the pieces are as varied as game used bats to actual World Series trophies to gimmick products made to promote the game.

The best part about the entire gallery is how well the items have been compiled by the gallery's managers Kevin Manley and Tim Ruge. Unlike most museums, there is a certain style to the organization of the artifacts that tells more than just a chronological story of the game. There is a display called "Defunct Teams," which shows jerseys from teams that no longer exist like the Washington Senators, St. Louis Browns, and Montreal Expos. There is also a wall of "Curses," celebrating the supposed cursed teams of the game. My favorite display is the "Cloud Over Baseball," which is a set of jerseys of prominent steroid users displayed directly above a celebration of Major League Baseball's Top 25 Moments in the game's history.  It's stuff like that that you'll never find in a museum and that makes this gallery truly special.

The one downside of this gallery is that it is not open to the public.  They do have occasional events at the site where the public can buy tickets and see the gallery, but this private collection remains private for the most part.  You can become a member though, which will give you access to regular tours of the gallery as well as a chance to attend a couple of the many events that the gallery puts on during the year.  These events usually have a former Major Leaguer player there to give a speech of some sort, and they regularly pull in Hall of Famers like Mike Schmidt, Goose Gossage, and Ozzie Smith to speak.  If you are interested in checking out the membership, you should go to their website linked above.  I'll warn you though, it ain't cheap.

I want to thank Tim Ruge for offering to open up the gallery to us on a Saturday morning.  It really was exciting to see all of the cool stuff they have there.  Thanks to jch24 we do have some pictures for you after the jump.  If you are in town and ever get a chance to tour the gallery, don't pass it up.  It is a must-see for all baseball fans. 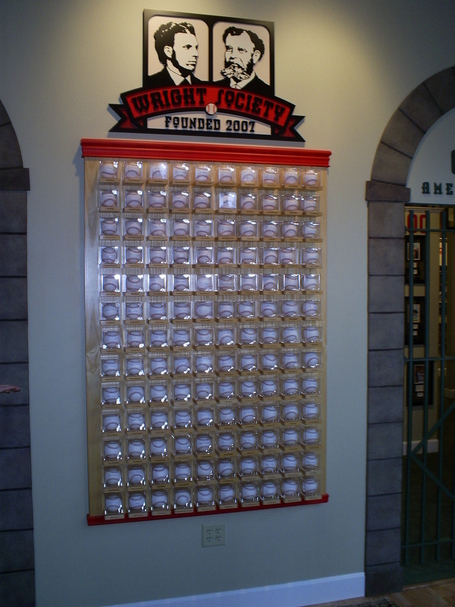 Each ball here represents one of the 125 Wright Society members, a list which includes Robert S. Castellini and Tim Kremchek.