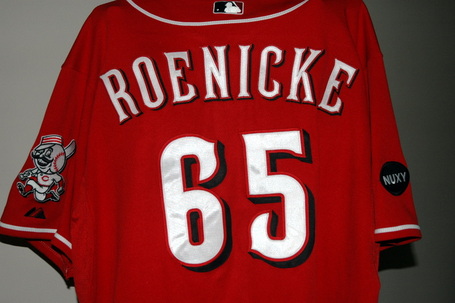 We have a winner in the Josh Roenicke Jersey Sweepstakes!  The winner is Petey Hendrix with his scientific guess of 68,211:

I have excellent math skills

I selected the median of joshuar9476’s and boobs’ answers. I believe I did that perfectly.

This saved me a lot of footwork, and did not alter my chances of winning.

Well, Petey, you picked the right two guys to cheat off of.  So, congratulations on your selection!  I will email you to get shipping information for the jersey.  Shipping charges are only $1300.  I do accept you allowing me to use your Visa or Mastercard for one day.

Answers to each question after the jump.