Share All sharing options for: Breaking Down Jay Bruce

Jay Bruce busted on to the scene last year at the end of May and didn't really cool off for the first 2.5 weeks of the season, after which he was hitting .382/.468/.632 and looked pretty much invincible.

Let's see if we can take a look at our sparkling new graphs and learn a little about Bruce's successes and struggles. 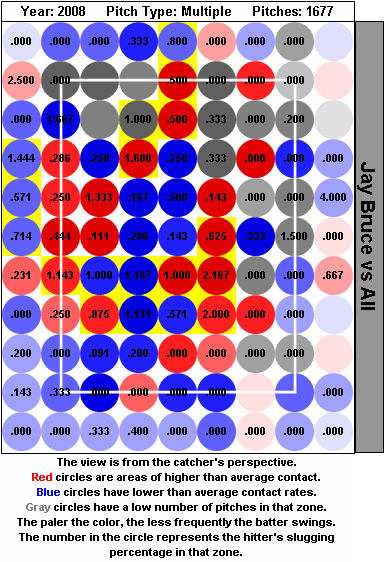 Click any image below to view a larger version above

The new yellow area behind the circles represents a cluster of power for the hitter. You'll see once we start looking at other players that Bruce actually has a small power cluster for somebody who posted decent slugging percentage.  This is likely because of Bruce's high strikeout rate.  As you can see in pretty much all of the graphs, Bruce fails to make contact quite a bit on his swings, especially right in the middle of the zone.  When he does make contact, though, he hits the ball hard.  And that's what he was doing the first couple of weeks with the Reds, until he faced his first knuckleballer (Tim Wakefield) and then went into a tailspin.  (I have no proof that the knuckleball affected him, but that's pretty much when Bruce started making much less contact.)

Some thoughts on what I see based on these charts:

Overall, I'd say the biggest concern for Bruce has to be the lack of contact made over the heart of the plate. His power numbers still look very good there, but I'd sure like see a lot less blue in the center of those graphs.

I'm still learning to read these graphs, just as you are.  Let me know if you see anything that sticks out that I haven't mentioned.  I'm also more than happy to break the data down even further, so if you have questions, feel free to ask.