Edinson Volquez and my attempt to explain a new graph

Share All sharing options for: Edinson Volquez and my attempt to explain a new graph

You might recall back in late Spring when I attempted to break down the hot and cold hitting zones for Brandon Phillips and Edwin Encarnacion.  While those graphs were all fine and good, I felt like they were lacking in any real pop, which is partly why you never saw them again.

Well, today I'd like to introduce you to a new graph that I've created.  I have no idea what to call it, but it is loosely based off of this famous image involving Ted Williams, so that's why it probably looks familiar to you.  It's still a little bit of a work in progress.  I expect to do some refining on it based on your suggestions and such, but I feel like it is both overwhelming and accessible enough to be released right now.  So, here it is.

Below you will see a graph of all of the pitches for Edinson Volquez in 2008 that registered with the Pitch F/X computers (3243 of 3389 pitches).  The pitches have been aggregated into circles that represent a specific zone around the plate. Width-wise, the circles are the size of an actual baseball, but for mundane reasons, the height of the ball is a calculated strike zone divided by 8 and usually comes out to about an eighth to a quarter of an inch smaller than the ball.  The balls on the perimeter represent every pitch that is more than the ball's radius outside of the strikezone, so obviously those balls are nowhere near representative size, but they make the graph look nice.

The colors come in three hues.  The red circles represent zones where the batter makes better than average contact per swing in that zone.  Blue circles represent less than average contact and gray circles indicate that less than 0.5% of the pitches in the sample were in that zone.  The shade of the circle also has meaning as circles with a darker shade mean that the batter swings more frequently at pitches in that zone, while circles with a lighter shade represent fewer swings per pitch.

Finally, the numbers in the circle represent the slugging percentage of the batter(s) on pitches in that zone.  I feel like slugging is most representative of the type of contact being made by the batter, so that's why I chose it over the batting average in the Williams' picture. 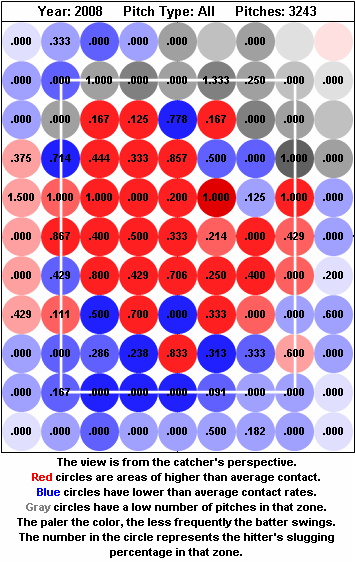 Click any image below to view a larger version above

The thing I really like about this graph is the ability to break it down by a variety of splits.  As you can see in the table above, I've broken down Volquez's season versus both right-handers and left-handers, but not only that, I've done it by pitch type as well.  (For those that are interested, I used the pitch type calculated by the Pitch F/X crew since I'm honestly not smart enough to use a pitch type algorithm successfully.)

If you click on the smaller images in the table, you should be able to view a larger version of that image.  I encourage you to look a his change ups, especially versus left-handers.  He was damn near unhittable with that pitch!  He's especially good when he kept it low in the strike zone, as you'd expect.  On the rare occasions that the batter actually hit it, they sure didn't do a whole lot with it.

I'll do more analysis on future posts with these graphs, but for now, I want to know your thoughts.  Are they understandable?  Is there something about them that you'd like to see changed?  Should we email Volquez and let him know that he should stop throwing his fastball on the inside part of the plate to right-handers?  Fire away with your suggestions/criticisms.