Share All sharing options for: Can Joey Votto win the NL ROY?

A few weeks ago I said this:

Well now I'd like to change my tune a bit.  Since I made that statement on September 4th, Votto has continued to be on a tear while Soto has cooled off some and now their offensive numbers for the season are damn near identical.  Let's take a look: 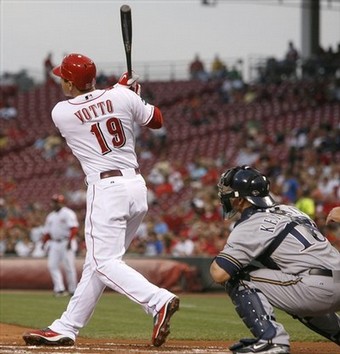 Soto does still have a slight edge offensively, mainly because of the 4 extra doubles and the extra home run.  Their OPS+ is, for all intents and purposes, identical and I think you could argue that Votto makes up for the slight difference in SLG with his slight advantage in AVG.  Either way, both of those numbers could easily shift in the other player's favor during the remaining 4 games.

Since the offensive numbers are basically a wash, voters from the BBWA will have to look elsewhere to differentiate the two.  This is where Votto is going to have some trouble.  Soto plays an important defensive position on the team with the best record in the league.  He also has the advantage of having a reputation of "working well with the pitchers," something Votto can't receive credit for.  And while Soto hasn't been outstanding defensively, he's definitely held his own.  Justin's system has him at 1.9 runs above average defensively and he's thrown out about 27% of would-be base stealers, which puts firmly in the middle of the pack for the league.

Votto hasn't been a slouch defensively either.  His error numbers are definitely too high, but he makes up for that with some of the best range at the position.  Justin's system has him as the 4th best defensive 1B in the league, though admittedly there are some shortcomings in his system for 1B, just as there are for catchers.  Of course, the big problem facing Votto here is that he is playing one of the easiest defensive positions on the field while Soto is playing perhaps the hardest position.  This is why, despite Votto leading in offensive runs above replacement and defensive runs above replacement, Soto takes the lead in total value once you adjust for position (again using Justin's system):

It's still a tight match, but Votto definitely has some work to do in making his case.  And as we all know, most writers won't look at something like Total Value or VORP or anything along those lines.  The biggest obstacle facing Votto may just be the 86-79 lead that Soto has in RBI.  But then, you all could easily guess by now that Soto has had 80 more runners on base for him than Votto this season.  How big of a difference is that?  Votto has driven in 16.9% of the runners that he has had on base for him this season.  Give him 80 more base runners and his 7 RBI deficit becomes a 7 RBI lead.

Ultimately though, I think Soto will win out because his team was better than the Reds.  That's a shame for Votto because he's a very deserving candidate, but then so is Soto.  It sure would be nice to see Votto win, and I think he has a case, but it's not so strong that I'll be outraged if he doesn't win.  Besides, the Cubs will need some salve for their wounds after choking in the playoffs anyway.

What do you think?  Does he have a shot?