An update on some of the changes around this place

Share All sharing options for: An update on some of the changes around this place 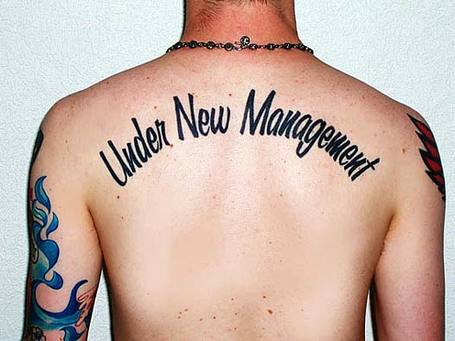 Since we've had some changes here recently, I thought it might be a good idea to give you a quick update on where we stand.  Even though I've put up the majority of the front page content for some time now, I have not officially been the primary blogger for the site.  When JD left a few months ago, Rick took over the role of primary blogger.  Unfortunately this was followed shortly by Rick losing interest in the Reds a bit, which is why you haven't seen him around here much lately.  My guess is that eventually he'll come back, though maybe not as an author.  Sometimes, eight years of losing is just too much for one man to stomach.

The powers that be at SBN have asked me to take on the role of primary blogger.  At first I was reluctant because I kind of like being able to disappear from time to time and not feel guilty that I am shirking some responsibility.  Ultimately I've decided to do it because I was afraid they would ask one of you numbskulls to do it and then nobody would listen to me anymore.  Honestly though, I took it on because I really enjoy this place and I want to keep it strong and growing.

Well, not much.  I'll still be writing here 3 to 4 times a week, hopefully more if the Reds ever make any significant moves.  BK has offered to give me a hand with some of the authoring duties on the main page, including the Farmers Only reports when the minor league season starts back up.  He and Brendanukkah will also continue to be your friendly neighborhood moderators.  Nukkah may also drop some knowledge on you if the mood ever catches him right.

The biggest change is that I have asked Charlie Scrabbles to also join the authoring staff.  I picked Scrabbles because I felt like he's been doing an excellent job lately of making well reasoned arguments, and he's put together a couple of very good FanPosts™ over the last couple of months that I'm hoping he can build off of.  I also picked him because, while we agree quite a bit, I've noticed that we have some differing opinions as well.  I'm really not interested in building a site where we all congratulate each other for having the same opinion.  I'm hoping that BK and Scrabbles will add some variety to the site because even though they are wrong when they disagree with me, it still makes for more interesting conversation.

What can you do?

If you have an idea that you'd like to work up yourself, keep writing those FanPosts™.  I love to see analysis come from the community because it's typically fresh compared to the same stale opinions that I spew.  Every day I look forward to seeing what comes out of this community.  Frankly, it's what keeps me interested in the Reds.

So keep participating.  The community makes this site, not the authors.  We are merely facilitators for the rest of the conversation that follows.  Without that conversation, we are just lonely basement dwellers talking to ourselves.  And even if our moms still love us, we like to pretend that we have friends out in Cyberspace.

Please join me in welcoming Scrabbles on to the team and thanking BK and Nukkah for helping out with the management of the site.  Hopefully we can make 2009 a good year for Red Reporter, even if it's not for the Reds.