Peer into the future: Edwin Encarnacion

Share All sharing options for: Peer into the future: Edwin Encarnacion 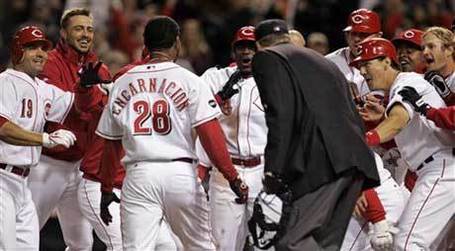 It seems like there are two trains of thought currently with Edwin Encarnacion.  On the one side, you have people who see a player that is still young with much promise.  These people tend to believe that EdE is due for a breakout season this year, potentially developing 30 HR power and driving in 100 runs. Some also believe that he will eventually become adequate defensively at 3B.

On the other side, you have people who are starting to grow tired of watching EdE and wating for him to break out.  Typically, these people don't see EdE as part of the future and wouldn't mind all that much if he were dealt either for an upgrade at 3B or a bigger bat for the outfield.  Their common argument is that he's not a good enough 3B and he doesn't hit well enough to play at any of the easier defensive spots.

Personally, I'm split on this one.  On the one had, I think EdE has the potential to be a solid, Tony Perez like bat for the next decade.  On the other, I think it's time for him to be moved off of 3B, which may actually mean that it's time to trade him.  I really don't have a solid answer on this one.  The only thing I feel strongly about is that leaving him at 3B this season is a waste of time.  I'd rather see if he can handle LF and then decide from there.

As for his projection, well I was surprised that it didn't turn out as optmistic as I thought it would.  I based it off of a set of players who had a similar start to their careers, which included a couple of MVPs and a Hall of Famer.  But, I'm not scientist and I'm sure I've got major flaws in my methodology, which is very subjective by the way.

I don't see EdE having a long career - though playing until age 36 is nothing to be ashamed of.  I think he'll have a couple of good seasons in there, but overall I don't think he'll be much better than what we're seeing today.  And apparently I think he'll have some sort of injury at age 32 which will more or less derail his career.

What do you think? How big of a fool am I on this one?