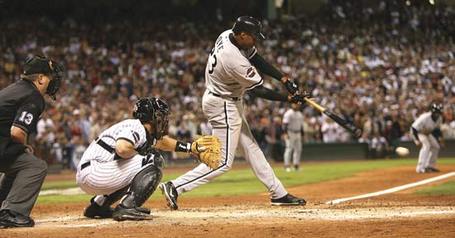 I know everybody has probably already talked themselves to death on this subject in your pool halls and at the local watering hole, but I had technical difficulties yesterday that prevented me from joining in, so now I will say my part.

NOTE: I've added a new column to the table.  Some of you may not be familiar with wOBA, but it stands for Weighted On Base Average and the short description is that it is a "runs per plate appearance" stat that has been adjusted to follow the OBP scale.  So, .335 is about average, .400 is very good, and Corey Patterson posted a .250 last season.  You can read more about wOBA here.

The first thing to point out about Dye is that 2006 is very much an outlier in his career.  The next highest slugging percentage for his career is .561, which he posted in 2000 with the Royals.  Those two seasons are the only time his OPS has been over .900 as well.  Not to say that Dye is a bad player, but we shouldn't expect him to be the guy he was in 2006.

What should we expect then?   Well, only two major forecasting systems have been freely released at this point, and both have him putting up very similar numbers:

Defensively, Chone Smith projects him at about 6 plays below average in either corner outfield spot.

Dye may get a little bit of a boost offensively by moving to the NL, but I wouldn't expect him to be much better than he was last season, and he would have finished 5th on the Reds in Justin's Total Value rating.  So, I don't exactly think we're talking about a huge upgrade to the offense here.

So why would the Reds want him?  Well, for one thing, he kills left-handed pitching.  Over the last 3 seasons, his OPS against lefties has been 1.075, .925, and .917.  He'd definitely add some pop to the lineup.  He has the 8th most home runs in the Majors over the last 4 seasons.  He's got a ring.  Arroyo's the only other current Reds player that can say that.

The real question though is "What's the goal?"  Dye is owed $11.5 million in 2009 and has a $10 million option ($1 million buyout) for 2010.  Adding Dye alone to the lineup does not turn the Reds into contenders.  And while he adds some pop to the lineup, he does nothing to help the shoddy defense.  I've said before that Dye is the type of player that you pick up to turn your team into a finished product, not as your first move of the off-season.

The Reds are several pieces away from a finished product right now.  If they had already acquired some players to solidify the infield defense and all they needed was a right-handed bat to round things out, I'd say go after Dye.  But bringing Dye in pretty much locks Encarnacion in at 3B, unless they trade him (and EdE's projections look a lot like Dye's).  Having an opening in LF gives the Reds the flexibility to be creative, but acquiring Dye would mean the Reds are using brute force to fill a hole.

I guess what I'm saying is that I'm not opposed to acquiring Dye.  He's a very good hitter and would definitely add something to the Reds lineup.  However, he wouldn't be the first move I make because acquiring an outfielder limits the team's options.  If Dye could put up Matt Holliday type numbers, I'd be all for it.  But since Dye's upside is essentially replacing Dunn's, offensively and defensively, I just don't find it to be the smart move at this point.