Peer into the future: Aaron Harang

Share All sharing options for: Peer into the future: Aaron Harang 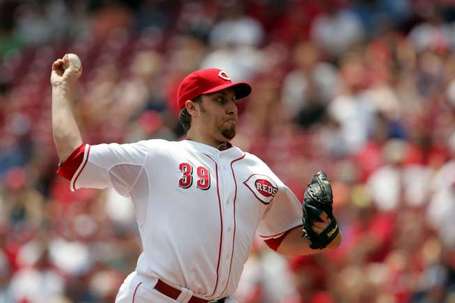 We've done a lot of talking about 2009, but I want to look a little further out into the future. From time to time throughout the off-season, I will look at a few players currently on the Reds and make a guess about what I think the next 5 years will look like for them. My guess will only be slightly scientific, and any science used will most assuredly be improperly used. I make no stance that these projections are anything but a fun exercise.

After the way he performed last year, some may think that Aaron Harang is spent. And could you blame them? Since 2005, Harang has thrown more pitches than all but 4 pitchers in the league, and if he hadn't missed 5 starts due to injury this year, he'd more than likely have the extra 300 pitches needed to take over the lead. No one would be surprised if the big guy started to break down.

Obviously Harang is not in a class with all of those pitchers - 3 of them are Hall of Famers, or should be - but it warms my cockles to see his name on that list.

I, for one, don't think it's happening though. I believe that the time he spent on the DL in 2008 was a direct effect of pitching 4 innings in relief 3 days after starting and then making a start 3 days after that back in May. If you look at his Pitch FX data, you'll see that his average fastball was a full mile and a half slower in his first start after his relief appearance than his typical start at home. It's no wonder that he got rocked by the Pirates that day. And it shouldn't be a surprise to anyone that he ended up getting hurt right around the same time. Strict pitch counts may be overrated, but there is something to not letting your pitcher pitch when he is tired. Mechanics get sloppy and the injury risk goes up dramatically when a pitcher is more tired than normal.

Harang showed me enough during his last 8 starts to convince me not to worry about his health at this point. I'm still concerned that Dusty Baker could make another foolish move like he did last May, but I'm not concerned about Harang's long-term health because of that incident.

The most important thing about those last 8 starts was that Harang got his control back. When he was hurting, his BB/9 were up over 3, but in his last starts of the year, that number dropped back down to 2.0. I'm not excited that his strikeout rate also dropped, but I'm willing to accept that if it means that his location is there.

My non-scientific projections for the next 5 years:

So, what do you think? Are these projections realistic? Will all of these seasons be with the Reds? If this is what Harang is due to put up over the next 5 years, would you trade him right now?