EdE to Atkins: A lateral move, at best

Share All sharing options for: EdE to Atkins: A lateral move, at best 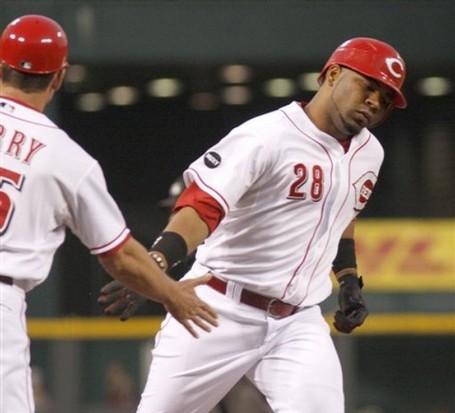 The talk yesterday of trading for Garrett Atkins left me with just one question: why?  I'm not questioning why because I think Atkins is a bad player.  That's not the case at all.  He's a good - not great - Major League player.  And while his numbers are inflated by playing in Colorado, it's not as if he would likely come to Cincinnati and turn into a terrible hitter.

No the reason why I ask why is because he's not really an improvement over Encarnacion at third base.  On paper, they are essentially the same player:

On that last point, the resemblance between their career road numbers really is quite striking:

You really can't get much closer than that, can you?

The only real difference between the two player's history is that Atkins has 2006 to hang his hat on, a season where he posted a .329/.409/.556 batting line with an OPS+ of 136.  It was a year where Atkins finished 15th in the MVP ballotting.  Encarnacion doesn't have a season anywhere near that year.  But then, besides 2006, neither does Atkins.

Oh, and there is one more difference.  Atkins didn't finally settle into the big leagues until 2005 when he was 25 years old.  Edwin just finished his third full season in the big leagues - a year when he was just 25 years old.  Atkins is moving into that phase into his career where we pretty much know what type of player he is.  EdE is still developing a bit - though by no means do I think he'll become an All Star.  Given the age of the two players, it's more likely that Edwin will be the one to continue to improve over the next couple of seasons.

On top of that, Atkins is in his second year of arbitration after making $4.4 million last season.  With EdE just entering his first arb year this season, I think we can expect that he'll be much cheaper in 2009.  Plus there is the extra advantage of another year of control over him.

Like I said, this is not a case of me thinking that Atkins is a bad player - far from it.  And if he were a left fielder or if he played good defense at 3B (a la Adrian Beltre), I'd be in support of the move.  But if he is any sort of an upgrade over EdE, it's minimal.  If both players stay on the roster, then one of them is going to play a new position while the other continues to play bad defense at 3B.  How is that an upgrade?  If they decide to trade EdE - a move I'm not opposed to if the deal makes sense - doesn't it make more sense to try to replace him with someone who is not an older, more expensive version of himself?

Can anybody give me a good reason why Garrett Atkins would be a real improvement over Encarnacion?