Share All sharing options for: What if the Reds went with youth in 2009? 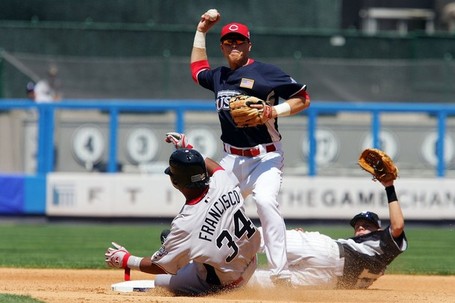 I was thinking this morning about the possibility that the Reds may remain inactive during the off-season.  My next thought was that maybe then they should go with a full-on youth movement and let the players for 2010 - at least those that have played in Double-A or higher - play and get them some experience so that they are rolling when 2010 comes along.  Who would those players be?

Drew Stubbs - he's probably the only real prospect in Triple-A, at least on offense.  Shaun Cumberland put up decent numbers, but I think he looks more like a 4th outfielder than an everyday starter.  A case could be made that Stubbs should start in CF even if the Reds don't go the youth route in 2009.  His defense should solidify the Reds up the middle and I believe that eventually he'll post an OBP in the .350-.360 range.  He probably could use some refinement though.  Chance of playing in Cincinnati in 2009: Very good.

Daniel Dorn - he's a left-handed power-hitter who played most the season in Chattanooga last year.  I doubt he'd make the leap over Stubbs, and given that he's left-handed I don't see him starting in front of Dickerson.  Chance of playing in Cincinnati in 2009: Slim.

Sean Henry/Chris Heisey - both of these guys are right-handed corner outfielders who need to develop some more power if they are going to play in the Majors.  They both get on base well and Heisey has some decent speed.  Neither player is ready to sniff starting in the Majors.  Chance of playing in Cincinnati in 2009: Tiny.

Chris Valaika - Outside of his first 200 PAs in Sarasota, his bat has been good all throughout the minors.  His defense was questionable at shortstop, but Doug has been noticing some chatter indicating that he might be improving enough there to stick.  If his defense is truly improved, I honestly wouldn't be surprised to see him break camp with the Reds and start at shortstop on Opening Day - especially if Alex Gonzalez continues to be unhealthy.  If the Reds decide to make it look like they are playing for 2009 though, Valaika will probably start the year in Louisville.  Chance of playing in Cincinnati in 2009: Good.

Justin Turner - By all accounts, Turner's defense at 2B is very good and his bat has been solid throughout the minors.  With Brandon Phillips holding on to 2B right now, it's doubtful that Turner will see any time in 2009 with the big club, but don't be surprised if he makes the jump if BP goes down with an injury.  Chance of playing in Cincinnati in 2009: Doubtful.

What do you think?  Any of these guys going to make the team out of Spring Training?