What will Walt Jocketty do?

Share All sharing options for: What will Walt Jocketty do?

Sorry for disappearing (at least from the front page) last week.  That'll happen sometimes.  We'll try to give you new stuff every day this week.  Hopefully the Reds will justify that level of interest. 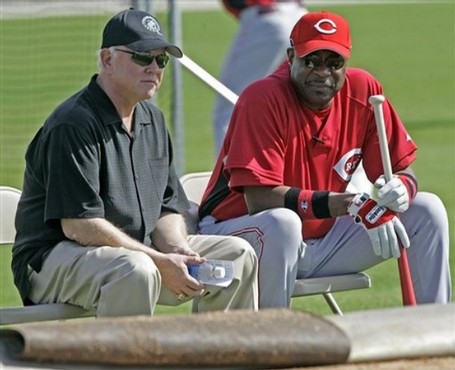 We've spent a lot of time this off-season throwing out ideas for various trade targets for the Reds.  But, the only real rumor involving the Reds on the trade market has already been shot down.

There have also been thoughts from others about who the Reds should pursue on the free agent market.  But, outside of discussions with free agents that were with the Reds last year, there has been very little chatter from the Reds about any possible pursuits.

Strangely, that doesn't seem to bother the local media too much.  Paul Daugherty thinks the Reds should just say no (way to keep it fresh P-Doc).  Fay agrees.  Honestly, I think that's a silly idea.  Not that I think the Reds will be good in 2009, but not doing anything not only means that you're playing for 2010, but you're expecting  to be able to fill all of your needs next off-season as well.  The Reds can do well to start laying the groundwork for 2010.  Doing nothing could leave them playing for 2011 at the end of next season.

We've seen or heard very little from Walt Jocketty since he's taken over.  He made two big trades this season with mediocre returns (not that he could have necessarily gotten more).  We've heard that he doesn't plan to trade Cueto or Volquez (so he's got a brain), and he's pursuing Weathers and Hairston (well, half a brain).  Knowing what we know about his history, we shouldn't expect him to sit around for too long, especially not with Bob Castellini breathing down his neck.

So, what do you think Jocketty will do?  Will he play for 2009?  Will he get that big right-handed bat that he said was the Reds biggest need?  Will he take Daugherty's advice and do nothing?  What do you think?