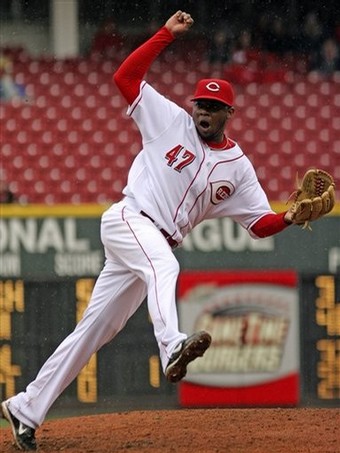 As you await with bated breath the thrilling conclusion to Game 5 of the World Series, tonight or whenever it decides to stop raining in Philadelphia, here's a look at the top 10 Reds pitching performances of the year, sorted (by Slyde) by game score. I also added links back to the original RedReporter threads, so you can remember where you were when these gems took place. You might not remember, for instance, that most of us never saw the best game on the mound this season.

10. Edinson Volquez, August 17, GS 71: The first of several appearances by Edinson on this list, on this night Volquez beat former Red Kyle Lohse and the St. Louis Cardinals. It was a typical late-season performance for Volquez, with only 4 strikeouts and 4 walks, but he only gave up 3 hits and fanned Rick Ankiel twice. RR

9. Aaron Harang, June 13, GS 72: This was a fun night on several fronts: The Reds beat the World Champion Red Sox, Jay Bruce and Adam Dunn homered and the Harang struck out 7 for his first win in 6 appearances. The Reds were already in last place at that point, but hey, a win over the Red Sox is a win over the Red Sox. RR

8. Volquez, May 7, GS 73: This game was over when the Reds smacked three home runs in the second inning off the Cubs' Jon Lieber, but Edinson made sure by striking out 10 for the second of 6 times (!) on the season. He walked a season-high 6 but got his ERA down to 1.06, which it would never be again. Also remembered as that time Joey Votto had three home runs. The Reds were already in last. RR

7. Volquez, May 23 ,GS 74: Three starts later, Edinson struck out 12 but got a no-decision. The Reds needed some late heroics -- a 9th-inning home run by Adam Dunn off Trevor Hoffman -- to pull it off. The Reds were still in last. RR

6. Bronson Arroyo, August 26, GS 74: Just days after Marty and Thom Brennaman railed on the radio that the Reds hadn't secured a complete game all year, Bronson came through with a solid if not flashy nine-inning, one-run game against the Astros to dig the Reds out of the cellar for good. Way to go, Bronson. RR

5. Arroyo, May 10, GS 77: The Bender was working as Bronson struck out 9 Mets to salvage a split of a day-night doubleheader. Then again, he was pitching on 6 days' rest after allowing 7 runs in 1.1 innings his previous start. RR

4. Harang, April 20, GS 78: The greatest moment of the season couldn't have happened had Harang not struck out 8 and allowed just 1 run in 8 innings to get the Reds to extras. Probably the most over-shadowed start of the season. RR

3. Volquez, June 4, GS 79: Edinson struck out 8 and allowed just 2 hits in 7 innings as the Reds beat the Phillies on just 3 hits. Approaching midseason, Volquez's ERA was still just 1.32 -- but it was about to go up in 8 of his next 9 starts. This game was pretty much the end of the Cy Young season. RR

2. Harang, September 17, GS 79: The Reds handed the Cardinals their 7th straight loss -- some consolation on a lost season -- and saw Harang get back into ace form, allowing 6 hits in a complete-game shutout. Hard to believe this was 1 of only 6 wins all season for the big man. RR

1. Johnny Cueto, April 3, GS 81: When Game 3 is the high point of your season, you probably root for the Cincinnati Reds. For many of us this was the first look at the sick movement on Johnny's Cueto's fastball, and Little Pedro seemed like a distinct possibility. Cueto struck out 10 Diamondbacks in 7 innings, taking a no-hitter into the 6th until Justin Upton's solo homer. Still, it was the only blemish on one of the best performances by any pitcher in the majors all year -- and it put the Reds in first place in the NL Central for the only time all season. Remember being in first? It happened. Not that many of us actually got to see it happen. RR