The curious case of Micah Owings

Share All sharing options for: The curious case of Micah Owings 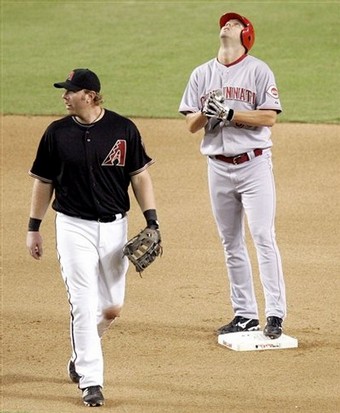 When the Reds traded Adam Dunn to the Arizona Diamondbacks on August 11, they didn't exactly get a king's ransom -- Dallas Buck, Wilkin Castillo and Micah Owings. But any haul that includes Owings has promise, because even if he fails as a pitcher, he's got a mighty bat to fall back on.

Most poo-poo the idea of moving Owings to the outfield, saying his primary effectiveness is as a pitcher. Among th naysayers: Mark Sheldon of reds.com:

Where do the Reds envision Micah Owings playing for the upcoming season? Is he going to be a starting pitcher, or do they have any thoughts of turning him into an outfielder or first baseman to get him more playing time?
-- Kimberly K., Phoenix, Ariz.

Being from Arizona and watching him with the Diamondbacks, you've likely seen firsthand that Owings is a good hitter as far as pitchers go. But that's just his side job. His main gig is, and should remain, as a pitcher. It's not that easy to just switch him to regularly playing as a position guy. Rick Ankiel is the exception to the rule, not what usually happens. Owings had a hot start in 2008 and ran into a slump and a shoulder injury. It's far from being the end of the line for him as a pitcher. He will likely compete for the fifth starter's spot next spring, and I'd make him the early favorite to get it.

In his time in Cincinnati, Owings had four pinch-hit opportunities -- with two game-winning hits -- and didn't throw a single pitch due to that lingering shoulder injury. "It's crazy, isn't it? I've enjoyed it," Owings said at the end of the season.

So why should Owings' 'main gig' necessarily remain as a pitcher?

So someone explain it to me. I get that most guys can't hit and pitch. But guess what: Some guys can. His big league pitching numbers are good (a 1.28 WHIP last year and about 7 K, 3 BB/game), but I doubt he develops into more than a No. 5 starter.

Not that that's bad. A good No. 5 is hard to find, and I hope he gets his shoulder healthy and has his best year as a pitcher yet, helping to solidify our rotation. He certainly has more room to catch on there in years to come than in left field, thanks to the corner-infield logjam created by Edwin Encarnacion, Joey Votto and Yonder Alonso. But I'm growing a little tired of the lack of creativity in the minds of baseball folks regarding Owings' hitting. No one is born a pitcher or hitter. His bat might still need some testing in the majors, but Owings certainly has the talent to play the game from either side of the plate.