Tuesday night at the playoffs: The Battle in Beantown.

Share All sharing options for: Tuesday night at the playoffs: The Battle in Beantown.

I thought these Rays and Red Sox hated each other.  Where's the fighting?  Where are the broohahas?  Nary even a donnybrook.  Talk about letdown.

The Rays could put the Sox in a tough spot with a win tonight, but this series is far from over.  The Sox have been down 3-0 and 3-1 in each of their last two ALCS appearances and gone on to win the World Series.  I, for one, wouldn't mind a little curse back on their heads again.  Just for old time's sake.

And even though this T-shirt is to celebrate their Division championship, it'd still be great to see a whole section of them at Fenway tonight: 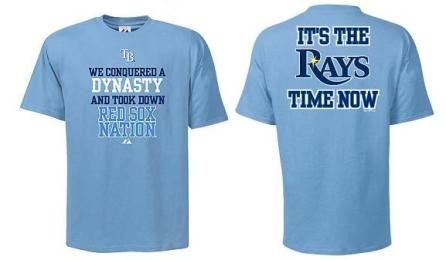