I want to look at some things that I'm hoping the Reds will do this off-season.  Things that I think will move them towards being a more successful team next year.  Some are specific, some are general, and most are more or less out of my ass. 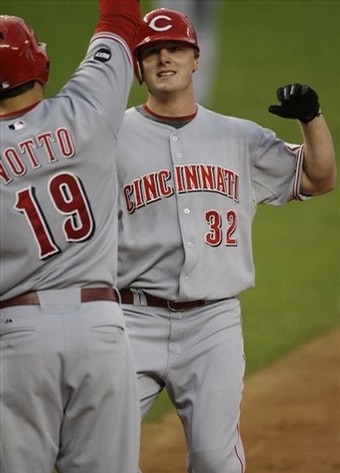 1. Get someone to work with Jay Bruce and Joey Votto on their defense.
This goes for everyone, but specifically these two guys.  Both players are the cornerstone for the Reds offense over the next 5 seasons or so.  Work with them now to turn them into complete players so that we're not forced to do a lot of "yeah, but..." with them.

Chris Welsh mentioned earlier this year that when Albert Pujols was moved to first base, he was always out on the field before batting practice taking ground balls and throws to get better and he didn't understand why the Reds didn't do it with Votto.  Take this opportunity to work both of these guys into gold glove players.  They both have the talent, and they both appear to have the drive to succeed.  Take advantage of that before the losing mentality that permeates this team starts to set in.

2. Move Edwin Encarnacion.
I'm a huge EdE fan, but he should not be playing 3B anymore.  His defense all but removes any positive contributions he makes on offense.  Either move him to LF and trade for a 3B or trade him as part of a deal to bring a more significant bat into the lineup (likely to play LF).  I hope he's part of the future, because I think he's got the talent to put up a .280/.360/.490 batting line every year.  But if he's doing it while he's hurting the team on defense, it doesn't matter much.

3. Sign Mark Ellis to play second base and move Brandon Phillips to shortstop.
You knew this was coming.  Phillips is probably an average to slightly above average defender at shortstop, but that's better than anything the Reds have right now.  He's probably also an average to slightly above offensive player at shortstop as well.  Again, better than what the Reds have right now.  Ellis is probably the best defensive 2B in the league, and while his batting line doesn't look that strong, he's been doing it in a ballpark that is significantly harder to hit in than GABP.  He's not much more than a league average hitter, if that, but his defense makes him one of the most valuable second basemen in the league.  Having both he and BP up the middle will do wonders for improving the Reds on defense.  And offensively, they won't be great, but it will be pretty good for middle infielders.

Addendum: Another name that is being tossed about as being available is Brian Roberts.  He's signed for 2009 at $8 million, so he's likely more expensive and would require trading some players to get him.  However, he's decent defensively and has an excellent bat.  I'd still go for Ellis first, but I wouldn't do a deal without inquiring on what it would take to get Roberts.

4. Get a significant bat for LF or 3B.
As comprised right now, the Reds aren't going to score a lot of runs next season.  Adding another strong hitter to the lineup is a must if they want to be competitive.  We've all heard the names Matt Holliday, Pat Burrell, and Adrian Beltre get tossed around, but Thundering Turtle also has me interested in David Dejesus, who could play CF occassionally as well.  I'm sure there are plenty of other names out there (like Raul Ibanez or Milton Bradley), probably some that we don't even know are available.  The point is that the Reds should have somebody with an .850+ OPS in each of those positions.  EdE could be one of them - hopefully either playing better defense in LF or being covered at 3B by a very good defensive shortstop - and the Reds need to find someone to play the other spot.  And they have to be good. 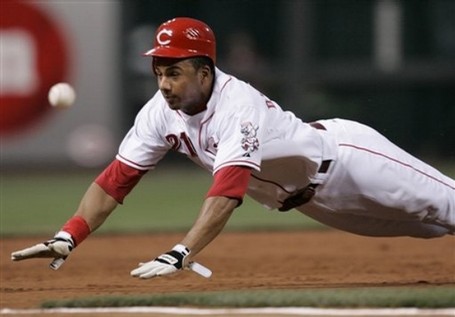 5. Dickerson/Stubbs '09
Drew Stubbs still looks like he'll be the long-term answer in CF.  He hit much better last season in Double-A and Triple-A and he appears to have made some significant progress.  Chris Dickerson is likely on the border between everyday player and 4th outfielder.  His minor league numbers were unimpressive outside of 2008, but he gets on base enough and plays good enough defense that he could probably play every day for long stretches during the season.

Looking at his numbers in the minors, though, his ideal role might be in a platoon.  As a minor leaguer, he put up an .828 OPS against right-handers, but just a .647 OPS against lefties.  The best option for the team is probably to platoon Dickerson with someone like Ryan Freel for the first few months of the season.  Dickerson will get about two-thirds of the ABs, and Freel won't be as dangerous to himself or his teammates.  Then, depending on how the platoon is going and how Stubbs is playing in Louisville, the Reds could bring up Stubbs to take all of Freel's and some of Dickerson's at bats and get moving toward the future.

The key this off-season is to not waste money on a CF.  The Reds have a viable stopgap on the team right now and a potential everyday starter who is nearly ready.  Both are strong defensively at a key defensive position.  Let them play!

6. Build a smart bench.
A bench with Jerry Hairston and Ryan Freel is redundant.  Keeping Norris Hopper on top of that would be stupid.  Walt Jocketty has a history of putting together solid, useful benches while in St. Louis.  Hopefully he can bring that success to Cincinnati.  Jeff Keppinger is an ideal bench player who can handle many positions and makes good contact.  That's who you want in a pinch hitter.  Alex Gonzalez isn't likely going anywhere, but by no means should be counted on to be the starter at shortstop.  This team can't afford another season musical shortstops.  Sea Bass would make an excellent bench option who can cover the position in an emergency.

They'll obviously add in a back-up catcher, but please, only one.  Three catchers is stupid waste of resources.  Because he is signed for $4million, Freel will likely have a spot to start the season.  That's not terrible, but it leaves the bench with some serious need for a left-handed bat and a bat with some power.  My first thought was somebody like Matt Stairs, but then I noticed that he'll be 41 next season, so maybe not him specifically, but someone in that mold.  It'd be nice if he could play some defense, but honestly, that's probably not completely necessary at this point.  It's more important that the Reds have a strong hitter on the bench that can come in and deliver some pop late in the game.  That is to say, not LLM.

7. A catcher to split time with Ryan Hanigan.
Maybe it's Wilkin Castillo, whose minor league splits balance out Hanigan's - though Hanigan is a better hitter versus both lefties and righties.  Or maybe it's someone like Josh Bard, who could add the necessary veteran presence that we all know you need at the catcher position.  Or maybe Jocketty might be able to steal away one of the vaunted Ranger catchers in a deal (not Gerald Laird, please).  Whoever it is, it's a good chance to be crafty and hopefully not overspend.  Hanigan may not be the catcher of the future for the Reds, but he can probably hold down the position for a year or two until we find that guy.  Unless that catcher of the future becomes available in a trade, just get somebody serviceable to split the time.

8. Bullpen on the cheap.
The Reds signed 3 free agents in the bullpen last off-season.  For the first four months of the season, the two best of those three had been Jeremy Affeldt and Mike Lincoln (before he collapsed in August).  Francisco Cordero wasn't terrible this season, but for the money that was spent on him, he wasn't all that impressive either.  The 'pen already has Bill Bray and Jared Burton to back up Cordero.  Josh Roenicke could be a stud and Daniel Ray Herrera might be a solid LOOGY.  There are pieces already there.  Don't waste money on overrated bullpen help.  Find a couple of deals on the market to fill out the bullpen and I think the Reds could have a very good set.  This is another area where I have confidence that Jocketty will come through.

9. Don't gut the system.
If the Reds are going to be competitive next year, deals will have to be made.  They have a lot of depth, though very few stars, in the minors right now and some of that depth will need to be utilized to improve the big league squad.  My concern is that the Reds might squander that depth to win now.  A team like the Reds needs to utilize it's cheap talent efficiently.  If they are going to sign players off the free agent market or lock players up long-term, they need to be able to offset that cost with young players.  Don't clean that talent pool out just to sell a few more tickets this year.  Work hard to maintain that balance for the future and the present.  I don't want just one winning season.  I want a dynasty!

10. Market the players.
The Reds have a ton of young talent - Bruce, Votto, Cueto, Volquez - and some guys moving into their prime - BP, EdE, Burton.  I should see these guys plastered all over the city.  Get this town excited about baseball again, so that when it all clicks together, there is already some momentum built up.  Turn Cincinnati back into the baseball town it used to be.  Not only will it help ticket sales, but it will turn the Reds back into a team that players want to play for.  Winning has to be a part of that as well, but that's going to come soon.  Be ready for it.